As the inhabitants of the Witch Towers show up on the blog every now and then, we thought it would be helpful to introduce them on this side...  Have fun with the "Who is Who" of the magical beings!
Btw - all magical bearies are original BiWuBears... ;O) 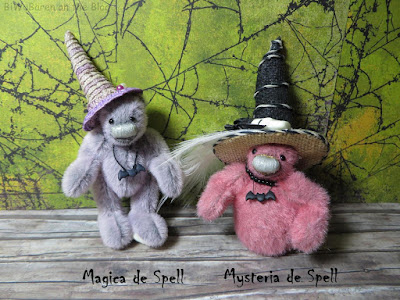 Magica de Spell is the Major Witch of the Witch Towers, as friendly as she is powerful - but nobody should ever mess with her! And nobody should ever underestimate her - a mistake the Evil Wizard (who used to bring terror to the magical world) made and paid with his life. Magica's name is a deep bow to Carl Barks, known by Donald-Duck-fans as "The Good artist", he created the original Magica de Spell, a duck witch inspired by Morticia Addams. Our Magica isn't interested in hunting for the lucky penny of Scrooge McDuck and she doesn't live at the Vesuv neither - she is known to live in a secret place, far far away and yet quite near to us.
Mysteria de Spell is Magica's younger sister who once lost her legs in a duel with the Evil Wizard and lives at her sister's since then. 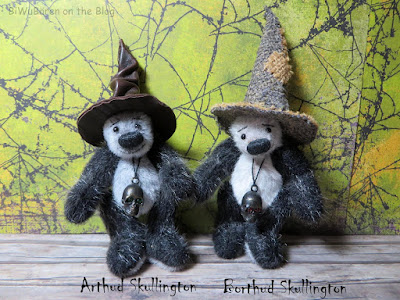 Arthud Skullington is Magica's great love ... He would never leave from her side anymore - and he will always remember that she still loved him when he was jinxed into a toad.
Borthud Skullington is Arthud's younger brother. He used to travel the whole world but since he met Mysteria he seems to feel quite at home at the new Witch Tower. 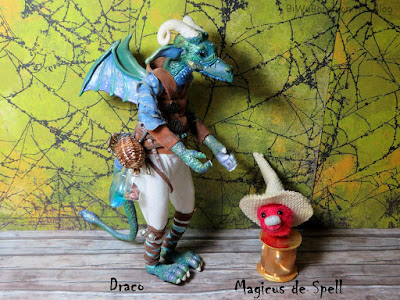 Magicus de Spell is Magica's and Mysteria's uncle, a powerful wizard who easily put a spell on almost every witch in earlier days. Since he lost his body in a magical duel with the Evil Wizard he lives at the Witch Towers and saves his special magic for just one special BiWuBeary wearing a white and pink fur.
Draco was laid in front of the Witch Tower when he was still a dragon-egg. He was found by Flutterby. As all humanlike dragons he grew in a short time to his actual stature und is now concentrating on studying magic. He was made by Andrea of Mistymountains. 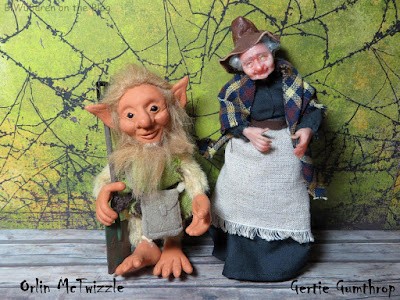 During her long life Gertie Gumthrop taught the secrets of herbs to so many sorcerer's apprentices that she truly deserves her retirement after being a witch professor for years and years. Gertie raised Arthud and Borthud who lost their parents when they were still very young - and now they're caring for her in return. Gertie was made by Nicky Cooper.
Orlin McTwizzle is a Scottish root gnome who was the servant of an evil vampire who treated him really bad. Since he's living at the Witch Towers he did not stop to be happy - but he's even more happy whenever he has the opportunity to dig in soil or to care about plants. Orlin is Gertie's gardener and was made by Melanie Frank. 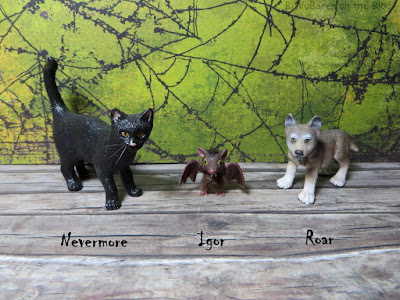 Nevermore is,  no... not a raven (Sorry, Mr. Poe) but in fact a witch cat and Magica's constant companion. Btw - Birgit claims Nevermore used to be a spotted cat by Schleich - but this might be a case of too much fantasy. ;O)
Igor is Magica's second constand companion, he's curious and also a bit vain. As a true vampire bat he loves blood of all sorts - and was made by Kristy Taylor.
Roar is Mysteria's faithful companion - and a werewolf puppy. Roar is a friendly little chap - but you should never tease him or mess with Mysteria... He was made by Schleich too. 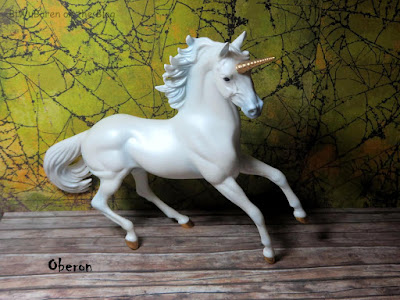 Oberon is the leader of the rainbow unicorns which bring the colours to the world: Three stallions in red, yellow and blue, three mares in green, violet and orange with the white of Oberon and the black of Titania at their sides. Oberon is the only one of the unicorns appearing in his normal size and he posesses magical healing powers in his golden horn. Oberon is a special edition of Breyer made of porcelain and was created by Kathleen Moody. 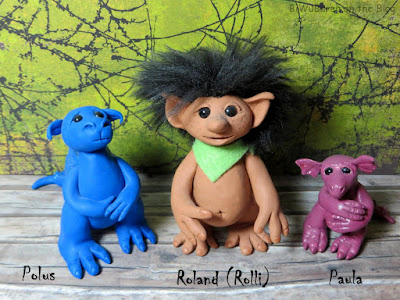 Roland called Rolli is a goblin who lived at the estate of an evil wizard. He's glad having found a good home at the Witch Towers now. As all goblins he has a tendency to nonsense and he's not very reliable, but he's a friendly chap.
Polus was as Rolli owned by an evil wizard and had a hard life there as he's very clumsy and damage never far away when he is around. Since he lives at the Witch Towers he's clumsy still but totally happy.
Paula's former life was even worse than the earlier days of Rolli, Polus, Ruby and Emmy - until Borthud started to take care of her. Since she's living at the Witch Towers she's still shy but happy every day. Paula as well as Rolli and Polus were made by Melanie Frank. 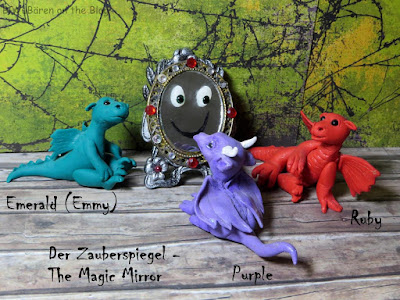 The Magic Mirror is from the heirloom of the Evil Queen, Snow White's wicked stepmother, and he was a real bargain. But "cheap" is not always the best choice as the Magic Mirror can get very nasty sometimes - but whenever there should be an emergency you can count on him.
The teenage dragons Ruby and Emmy (short for Emerald) found together with Rolli and Polus a new home at the Witch Towers. Since Purple joined them they are some kind of "Trio Infernale" having nothing but mischief in their heads. Their favourite hobby is driving the Magic Mirror crazy. Ruby and Emmy were made by Melanie Frank, Purple was won in a giveaway from Andrea / Mistymountains. 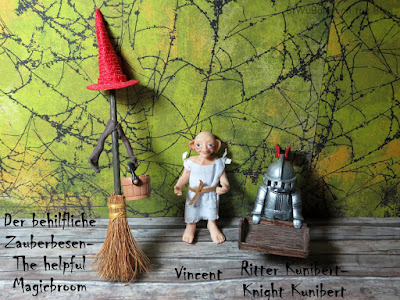 The helpful Magicbroom cleans the kitchen - and it's no surprise he's reminding of Disney's Fantasia. Hat and broom were made by Kat-the-Hat-Lady, the painting of the broom-stick and the arms were made by Birgit.

Vincent is a house elf - busy as a bee, friendly and always helpful, even the young dragons fail to make him nervous. Vincent was made by talented Sandra.
Knight Kunibert wanted to be a hero, fight dragons, rescue lovely maidens... now he's helping the helpful Magicbroom in the witch's kitchen. His hobby is baking, preferredly "Snow White's Death", an apple pie from his own recipe. Knight Kunibert is a Playmobil figurine, only painted to take away the plastic shimmer and being connected with his tray. 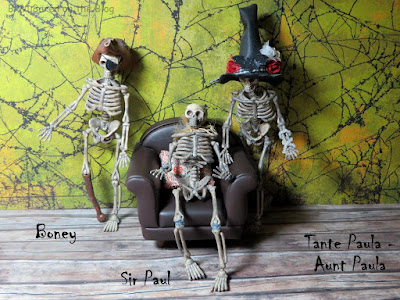 Sir Paul is the skeleton of the Witch Towers, he likes feeling comfy in his chair with a pillow in his back because this makes him stop feeling his bones. Sir Paul is known for having a face perfect for any hat.
Aunt Paula and Boney are two more skeletons of the Witch Towers. It is well remembered that Aunt Paula only wanted to visit her nephew Sir Paul... since then she simply didn't leave. She can drive anyone nuts within seconds but since she saved Polus' life without taking care of her own bones all the Witch Tower inhabitants are used to counting to twenty in their thoughts... In his lifetime Boney used to be a pirate of the Caribbean - since Borthud met him during one of his many travels they are inseparable friends. 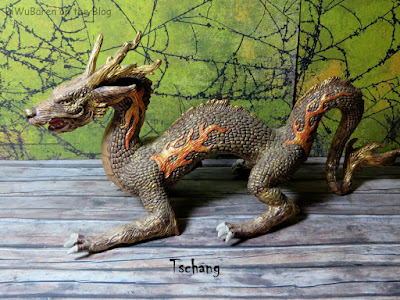 Tschang, the golden dragon, is Borthud's friend and true companion - and propably the only dragon who visits a Christmas Market every year. Tschang used to be a chinese dragon made by Papo but this was before he met Birgit and her brushes. 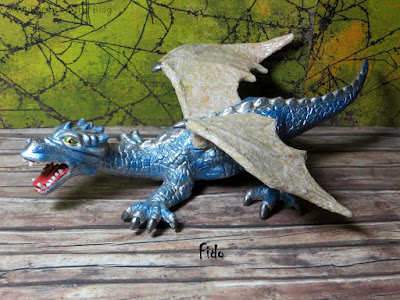 Fido is the guard dragon of the Witch Towers - and simply the best for this job. He used to be a simply painted, cheap toy-dragon made from plastic, but then he had a rendezvous with Birgit and her brushes. 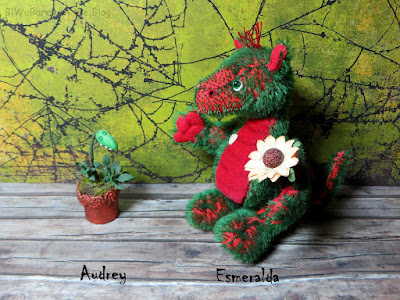 Audrey is Fluby's worst nightmare, since she's living in Gertie's magical roof garden he secured the doors of Strawberry Cottage with numerous padlocks. Maybe Audrey should better stop saying "Hi, Sweetie..." to him. She was made by Melanie Frank.

Esmeralda is Gertie's little dragon friend and was made by Tinchen of "Tapsi's Bärenhöhle".
(The following pictures still need an update:)
The Garden of the Owl Tree is situated on the left side of the witch tower. Here's the home of Oberon and his Rainbow Unicorns, the Forest Elves, the Mermaids (all by Preiser, painted by Birgit) as well of some frogs (by Georgina Marfels and Nicky Cooper) - all living in the shade of the Owl Tree and the Rootmushroomtree. 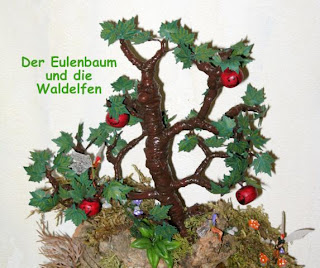 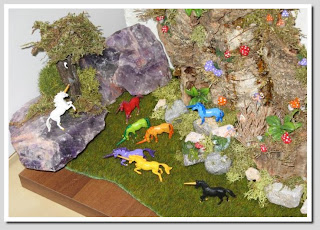 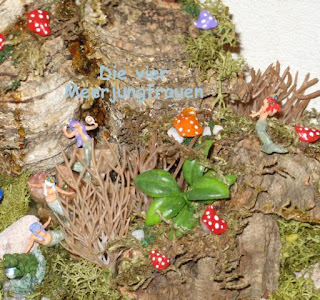 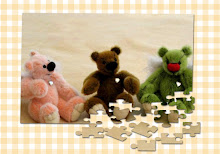